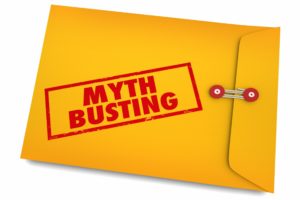 Obstructive sleep apnea is a common condition that causes frequent interruptions in breathing from an obstruction in the airway. If you’re among the 22 million Americans living with the condition, you’ve likely heard various information about the disorder. Unfortunately, much of what you’ve heard may not be true. Don’t let common misconceptions negatively affect your sleep quality or health. Here are 5 facts about sleep apnea myths you need to know.

Myth #1. Snoring is the same as sleep apnea.

Fact: Many people believe snoring and sleep apnea are the same, but this isn’t accurate. Everyone snores occasionally, such as when battling a cold; however, if the issue is ongoing, it can be a symptom of sleep apnea. The two conditions are often found together because snoring is caused by vibrations of air as it passes by the soft tissues in the back of the mouth and throat. Since sleep apnea is caused by the narrowing of the upper air passage, it increases the likeliness of snoring.

Myth #2: Only men can have sleep apnea.

Fact: It’s true men are more likely to have sleep apnea; however, anyone can suffer from it, including women and children. According to recent studies, 6% of women have the condition after menopause, but females make up 45% of sleep apnea cases among adults. Many women don’t realize they have the disorder because symptoms can manifest as insomnia, fatigue, and depression, which means it’s often misdiagnosed since snoring isn’t as common.

Myth #3: CPAP machines are the only treatment.

Fact: The most traditional treatment for sleep apnea involves a CPAP machine. It delivers a gentle stream of air pressure through a mask worn over the nose. Although it’s an effective treatment, it has a low compliance rate because it can be bothersome. As an alternative, patients with mild-to-moderate sleep apnea can benefit from an oral appliance. The custom-fit device protrudes the lower jaw forward while sleeping to keep their airway open. It’s a comfortable, convenient substitute for a CPAP, but it can also be used in combination with the machine.

Myth #4: Only people who are overweight are at risk.

Fact: Obesity is a leading contributor to the condition, but people with an average BMI can also experience pauses in breathing. Several factors contribute to the development of sleep apnea, including genetics, neck circumferences, and facial structures.

Fact: Untreated sleep apnea causes more complications than just tossing and turning at night. It can have potentially deadly complications because you’ll be at risk of several serious issues, such as cardiovascular disease and auto accidents.

Don’t let false information put your health or quality of life at risk. Get the facts from your sleep apnea dentist to breathe better and sleep soundly.

Dr. Dernick earned his dental degree from the University of Texas Dental Branch at Houston before continuing his training in sleep-disordered breathing. He offers safe, effective solutions to treat sleep apnea. If you believe you have the condition or suffer from chronic snoring, contact our office today to schedule a consultation.

Comments Off on Breaking 5 Common Myths about Sleep Apnea

Sorry, the comment form is closed at this time.